US Marine falls for Arab princess and smuggles her out of Bahrain to get married … it must be a movie script, right? Not yet. But as Hollywood’s directors queue up to get their hands on the story, the real-life couple involved awaits the decision today that will seal their fate. Duncan Campbell reports.

It had everything a film studio or network could dream of: a clean-cut hero and an exotic heroine, love across the divide, a great escape, desert sands and sinister foreigners. It was Romeo and Juliet meets Desert Storm. It was Runaway Bride meets Lawrence of Arabia. It even has a cliff-hanger ending which is due to unravel at any time.

He was a clean-cut, 25-year-old US Marine lieutenant corporal called Jason Johnson, serving with the US Navy Fifth Fleet. She was a 19-year-old Bahraini princess called Merian Al-Khalifa who had taught herself English. When their eyes met in a shopping mall in Manama, the capital of the Gulf state o Bahrain, last year, it was love in a hot climate.

Her family discovered the courtship and she was confined to her home, but continued the romance by telephone. Then, finally, the couple decided to flee and make their lives together in the USA. It may sound like a treatment for a movie but this one is – more or less – true.

Johnson had used his Marine-issue, night-vision goggles to check out security at the airport. He discovered that while Bahraini citizens had to show a passport when boarding a plane to leave the country, US Marines did not. He forged papers for Al-Khalifa so that she would appear to be a member of the Marine Corps. Then as the time for departure approached, he got his beloved kitted out in sloppy, baggy American clothes. She hid her long hair under a New York Yankees baseball cap and, last November, they boarded a commercial flight from Bahrain to O’Hare Airport in Chicago.

There the hoax was discovered by immigration officials who wanted to deport her immediately as an illegal immigrant. She asked for asylum, claiming that if she returned to Bahrain her life would be in danger. She was eventually paroled into the US, granted a hearing and allowed to remain in the country while a decision was made.

After being released by the Immigration and Naturalization Service (INS), the princess married the Marine in Johnson’s home town of Las Vegas. Johnson, the son of a cement truck driver, was duly demoted to the rank of private for bringing an illegal immigrant into the country. But he is still serving at his Marine unit in Camp Pendleton in Southern California, where the couple now live on base.

Today they are due to attend a private hearing with the INS in San Diego, where a decision will be made as to whether or not Al-Khalifa is allowed to stay. Even though she is now married to an American citizen, she still entered the United States illegally, the INS will argue. Technically, this means she could be deported and could then apply to enter either from her home country or another country of her choice.

From the time of their arrival last November until last month, the world was unaware of the couple’s story. But when a date was set for the immigration hearing, Johnson decided they needed the media on their side. As decision day approached, so interest increased, although Al-Khalifa has been reluctant to talk to the British press because she believes her family is more likely to see British newspapers and does not want to offend them.

“I did the worst thing possible in my country,” she said in one interview. “I fell in love with a non-Muslim. I’ve ruined the reputation of my family.”

She said the fact that Johnson was an American only made matters worse. As the daughter of Sheik Abdullah Al-Khalifa, who is the cousin of the head of state, Emir Hamad bin Isa Al-Khalifa, she is part of the ruling elite. For her to marry a non-Muslim and elope in, of all places, Las Vegas, it is obviously something of an embarrassment. But is it more than that?

“They’ll kill her if she ever returns,” Johnson has been quoted as saying. Although there is no suggestion that her family would lift a finger against her, he believes fundamentalist clerics could threaten her life. Johnson’s own family has made sympathetic and supportive noises about the couple, while saying they understand how their daughter-in-law’s family might well have been upset by her sudden departure.

While the elopement has become big news in the US, it has had minimal coverage in the Middle East. “The Arab press are treating it as something which should be hushed up, or mentioned only as a matter of shame and indignation,” says the veteran Arab journalist Abdullah Homouda. “She is considered a disgrace to the family and a political embarrassment.”

As the couple fight for the princess’s right to stay, the story has also entered the political arena in the US: one of California’s two senators, Barbara Boxer, has indicated that she will back the couple’s wishes and is due to appear at a press conference today at the time of the INS hearing. She has written a letter supporting the couple and parallels are being drawn with the Cuban Elian Gonzalez case – although so far, no public figure has suggested that Al-Khalifa should be sent back to her family. This is a story where everyone wants to be on the happy-ever-after side. Al-Khalifa speaks good English and has been described in the American press as “sounding like Posh Spice”.

The story also has implications for the US military, which is particularly sensitive to public opinion because of its recruitment problems. Johnson offended many of his fellow “grunts” and “leathernecks” by saying that his love for his wife comes before his love for the Marines. He has been harassed on the camp, where the couple live modestly. She is supposedly discovering the joys of housework. His superiors have publicly allied to support him – the Marines do not want to be seen as the bad guys.

As attention focuses on today’s hearing, a skillful operation to ensure that the tale receives maximum coverage and makes it to the movie screens has been taking place. A key player in this is Thomas J. Colbert, the president of Industry Research and Development (IRD), a company that hunts down dramatic stories in local newspapers and places them on television and in national newspapers and magazines, with the goal of attracting Hollywood interest. He has 45 clients, and with a half-dozen staff members, has handled 6,000 stories since starting up, nine years ago. Twenty-one of them have become films, but this one is different.

“I knew it was a gem,” said Colbert, who is based in the Los Angeles community of Calabasas. “It was the Persian Gulf Elian [Gonzalez] story, one of the biggest stories we’ve ever had.”

A small local news item had come out in “dead time” on a Friday evening and no one in the national media had picked up on it. Colbert decided to track down the couple, and he found them after calls to 22 Johnsons in the Southern California phone directory. He explained he could help publicize their case, “but I warned them it would put them in the middle of a firestorm.”

Colbert said he had to make sure they could both handle the pressure before he pressed the button. The princess seemed well equipped – “She’s a sweet gal and she’s very smart” – so he went ahead. “They appeared to be very much in love,” he added.

Colbert then contacted a movie-making partner in Beverly Hills and told her the story. She wasted no time in meeting the couple and signing up the movie rights. Colbert then started planting stories in the national press “to fuel the interest.” Already potential directors, writers and producers have emerged. A firm offer for the rights has just been made by Howard Braunstein, who is currently remaking South Pacific with Glenn Close in Australia.

“I fell in love with them,” said Mary Aloe, Colbert’s development partner. “They are an awesome couple. Their story has everything. It’s a thriller and there could be three different endings. They could live happily ever after and find out that her family secretly supported her. Or she could be sent back and he has to let her go. Or she’s an independent young woman who realizes she loves Jason but now that she’s in America she wants to move on.”

Colbert adds: “no matter what the ending, it’s still a movie.”

So is it being cast already? Aloe thought Brad Pitt was “a bit too laid back… Jason is a real John Wayne character, a young Steve McQueen all-American renegade, completely without fear.” For the princess, Selma Hayek has already been mentioned and Aloe reckons that Shannon Elizabeth from American Pie would be ideal.

It has a potential villain, in the shape of cold-hearted Arab clerics wanting the love-struck young woman to return to face punishment. But so far, the Bahrainis are not playing their part quite right. A statement issued by the Bahrain Embassy in Washington indicated that her family would love her to come home and there would be no punishments or reprisals. 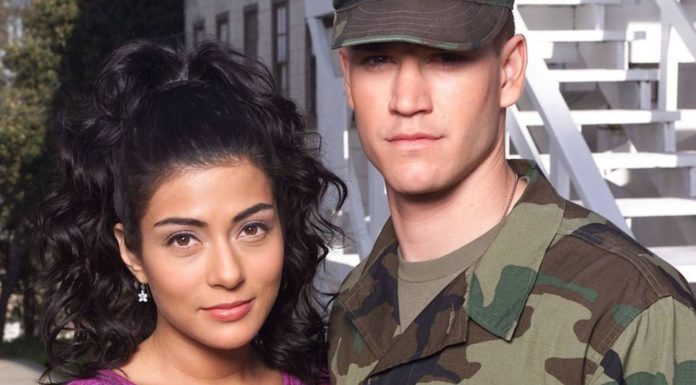 Questioning Robert W. Rackstraw: Is this how an innocent man would act?