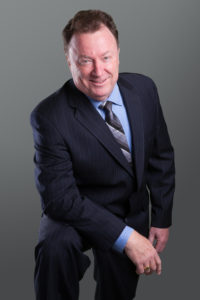 The next time you watch television, you will likely see the results of Thomas J. Colbert’s work.

His unique research company, Industry R&D, Inc. (IRD), which is tucked into a corner of Ventura County, California, searches out compelling tales from America’s small towns and then gets them to the rest of the nation within hours.

Sounds simple enough. But to really understand IRD, imagine a creature perpetually in motion, powered by computers and phones, with 600 arms attached to it. The arms are small-town news reporters and freelancers, each transmitting breaking articles to the massive head—the editorial staff of IRD, which distills more than 100 story ideas a day down to the very best.

“There really aren’t more than 20 gems a day,” says Colbert.

For the last 25 years, the company founder has also been an adjunct training instructor at police, fire and military academies. That has left Colbert with an old-fashioned Rolodex containing hundreds of national contacts with badges and uniforms. And the former students of course call in with breaking cases and updates, too.

“My staff loves it here because one day you’re working on a rescue story, the next a medical miracle, then a feature movie, a love story, an undercover operation, a child hero — there are really never two days alike.”

IRD then takes these off-the-grid tips to the network news development staffs, film producers, and publishers on a daily basis.

Tom Colbert is a curious mix of a person. He is, first and always, the newsman — efficient, curious, demanding, and result-driven. A tall, boyish-looking redhead, Colbert favors the casual style of Hawaiian shirts and sandals at work, a look that belies the sharp business acumen simmering below the surface. Humble about the genesis of the 1992 company, he credits his wife with his success.

“Fortunately, I had just married a beautiful woman, the subject of one of my stories,” he tells me. “Dawna had the business smarts to make this all happen.”

Most of Colbert’s staff and contact relationships were formed long ago, and have survived and thrived for decades. Terry Raskyn runs the New York office of IRD. A true veteran of the television news business, Raskyn is so deeply involved that she measures time by major news stories. “I’ve been working for Tom since just before 9/11,” she says. “When OJ [Simpson trial in 1994] happened, we put together an instant book.”

Colbert elaborates on the extraordinary circumstances. “I got a call from the coroner’s office from a guy called Knuckles,” he explains. “He said police were looking for OJ. We had a book commitment the next morning.”

The news pipeline that Colbert created changed the nature of the business for countless small-town reporters. The biggest change is that the freelance tipsters now get a piece of all the national action. Indeed, the historical lack of financial reciprocity between the major media and regional sources is what prompted Colbert to strike out on his own, after many years at the CBS news station in Los Angeles, KCBS-TV, and at Paramount Studios.

The idea worked, and Colbert’s original army of 150 has ballooned to 500 news sources around the world, including some funneling tips through an IRD office in New Zealand. “It’s very competitive to become an IRD source,” Colbert explains. “Knock on wood; we’re still the only middleman service for small-town reporters.”

In Denver, Barry Bortnick, a newspaper reporter with 20 years experience, is one of Colbert’s news sources and book authors. “I have known Tom and the gang at IRD for 15 years,” Bortnick says. “Tom knows the media like no one else, and he works his butt off for his clients and friends.”

On the other end of his business are the clients who pay for the service. They rely on IRD’s efficiency and honesty. In New York, Susan Zirinsky is the executive producer of CBS’s “48 Hours / Mystery.” She can’t afford to waste time with predators trying to make a fast buck, often from another’s misfortune.

“There are these people called story brokers,” Zirinsky explains. “I have found dealings with some of them to be grotesque.” In contrast, Zirinsky is comfortable working with IRD and Colbert. “IRD is just a clean group of reporters,” she says. “Everything is above board.”

That opinion is echoed by other clients, including Nash Entertainment’s Debra Weeks, the executive producer of TruTV reality shows. Weeks has known Colbert since college, and calls him a “straight shooter.”

IRD’s core focus, however, is developing books, television movies and feature films based on the story tips—more than twenty have wound up on the big and small screens.

Joey Plager was the executive producer of an NBC movie titled Baby Brokers, starring Cybill Shepherd. It was based on a Los Angeles news story, broken by Colbert, about a deceitful mother and father selling their unborn babies to desperate, childless couples. Plager also had a good word. “Tom has a really great nose for stories that both entertain as well as educate,” he says, “and he’s a fun guy to work with.”

“What I enjoy most is being there first,” says Colbert, summing up his infatuation with the true-story business. “It’s like watching the future unfold from the front row.”

FYI (2021): Colbert is now a full-time story-developer, author and executive producer. His loyal IRD reporters, however, still send him story gems. To see some of the tipsters’ pitches being considered by Hollywood, visit TJCConsulting.biz.

Was Robert W. Rackstraw a ‘homeless disabled vet’ or the sly...